Teaching Dante on the Commons

Although writing is still a primary focus, using the website for the course made me shift my attention toward the visual. For a start, I decided to continue the approach of previous iterations of this class, taught by Julie van Peteghem whose final paper assignment asks students to analyze a visual representation of the Divine Comedy produced from Renaissance to the present day. I put even more emphasis on the visual arts by asking my students to write blog posts (instead of traditional response papers) and encouraging them to include images and to comment on them in their writing. 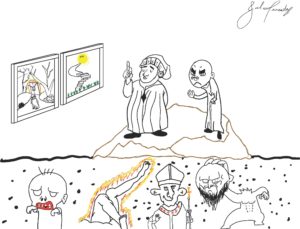 Many of Dorè’s illustrations are available in the public domain and have been among the students’ favorites. However, in the page called Resources, I included a list of websites where students could look for additional images and commentaries on the poem. A number of digital initiatives exist, each of them with a special focus, but all include artworks related to Dante’s work. For example, Dante Worlds (University of Texas) features drawings and illustrations by Vellutello, John Flaxman and Gustave Doré, but also original artworks by Suloni Robertson. Digital Dante, a website created by scholars at Columbia University and enriched by researchers from several other institutions, has been crucial to the course. Professor Barolini’s commentary on the website has guided us through all cantos of Inferno and some parts of Purgatorio. The “image” section of Digital Dante presents Sandow Birk’s illustrations and an insightful essay about William Blake’s interpretation of Dante. Birk translated the text into visual representations of contemporary America.

I assigned a reflection post in the middle of the journey of our semester that asked students to comment on their own public writing. The students all submitted the assignment on time, and they all used tags and categories. They were free to write about any aspect of their blogging activity, but most of them assessed their use of secondary sources or images in their posts. “My first two posts contained more summary than they contained analysis,” wrote one student. “With each consecutive post following the first two, I believe I progressed in my ability to make better connections, analysis, and find a theme within the Canto.” Similarly, a second student commented: “My first four blog posts were more like summaries rather than reflective posts,” but also included a further reflection: “They all included images with a short description of them but, I mostly summarized what the canto was about. However, my blog posts five and six had more connections, comparisons, similarities and changes in style.” Reflecting specifically on the inclusion of images in the posts, a third concludes: “I think including artwork sometimes helped me understand the Cantos better and therefore respond better.” And then there was a post that had the form of a comic strip – one of the best ways to reflect on the relationship between words and image while reading Dante. Not only does teaching on the Commons add a visual quality to my course, but it also encourage students to produce creative material as a comment on the Divine Comedy.

Stefania Porcelli is a PhD candidate in the Program of Comparative Literature (Italian Specialization) at The Graduate Center. She is completing her dissertation entitled “Narrating Intensity: History and Emotions in Elsa Morante, Goliarda Sapienza and Elena Ferrante.” Porcelli teaches Italian Language, Culture and Literature at Hunter College.