Tools of Technological and Intellectual Change: OER and the Democratization of Knowledge Production

Much has been written about the production of knowledge, the validity or social value of new forms of knowledge, the public debates about the politics and/or (im)proper practices of access to knowledge, and its organization and dissemination within the academic realm. Most famously, Michel Foucault first examined the ways in which the production of knowledge within the human sciences, from the eighteenth century onwards, became bound up with dominant political interests of social control (Foucault, 1977/1995). Based on this bold assertion, the school has been seen as an apparatus that exerts and legitimizes the power and knowledge of the state, while the university has steadily become a complex web of liberties and privileges that, in my view, the majority white population takes for granted. I have no intention here of even trying to review, or unpack for that matter, the multifarious debates about power and knowledge relations within our school system by way of entering into a Foucauldian discourse analysis. The production of knowledge is most commonly understood, in the end, both as an outcome and a process of pedagogical decisions made in a context of technological and intellectual conditions.

Recognizing, however, that the recent efforts to rethink knowledge production by introducing Open Educational Resources (OER) adoption programs will help us better understand, on the one hand, how social exclusion has long been implemented in higher education in the United States, and, on the other, how these same efforts have come to undermine larger exclusionary implications in education by enabling accessibility to the teaching material. Therefore, by widening our scope beyond the value and serious significance of adopting OER in our teaching strategies, I contend that the ethos behind this movement has been to democratize the production of knowledge as a process and outcome. To put it differently, OER not only produces knowledge but also willfully rejects commercialized forms of education, generated by the steadfast permeation of capitalist relations in the U.S. educational system over the past four decades. In this respect, I further argue that OER is an ethical call for, and thus the first important step towards, democratizing education and liberating it from profit-driven conditions that continue to deny access and opportunity to socioeconomically disadvantaged students.

Let me briefly consider, in the interest of clarity and insight into the capitalist fabric of higher education today, a definition of Open Educational Resources that directly foregrounds the importance of accessibility and transparency of knowledge, and its production and dissemination. According to the Hewlett Foundation, one of the largest supporters of the OER movement, “OER are teaching, learning, and research resources that reside in the public domain or have been released under an intellectual property license that permits their free use or repurposing by others. Open educational resources include full courses, course materials, modules, textbooks, streaming videos, tests, software, and any other tools, materials, or techniques used to support access to knowledge.” It is precisely the lack of access that engendered the birth of the OER movement, and with it an adamant desire to extricate the production of knowledge from a capitalist venture, whereby, in its most contemptible application, students lose their scholarly signification because they are perceived either as clients, according to their socioeconomic background, or passive beneficiaries of large, long-term loans.

Bernie Sanders, Democratic nominee in the 2016 presidential election, has repeatedly declared that all students deserve the opportunity to receive an affordable, quality education in all levels of K-12 and beyond. Sanders has introduced and supported the passing of Congressional Bills to make public colleges and universities tuition-free, as well as to substantially reduce student loan interest rates. While such a radical vision has been consistently and disparagingly rejected by the anti-socialist politics of corporate America, as much as it has been widely unpopular in the mainstream society for different reasons, there was a time, not so long ago, when college attendance was affordable and for that reason accessible. 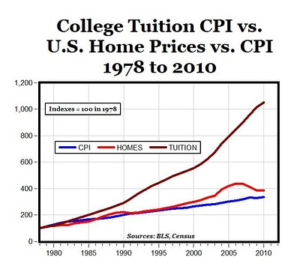 “Debt Serfdom” by Bernard Goldbach is licensed under CC BY 2.0

According to economist Ronald G. Ehrenberg, “…about 5.5 percent of students enrolled at four-year colleges in 1997–98 were enrolled at colleges that charged more than $20,000 a year…Inasmuch as the vast majority of students attend public institutions, about three quarters of all students attending four-year institutions were paying tuition and fees of less than $8,000 a year” (Ehrenberg, 2000: 5). This description seems completely disconnected from our current reality. Indeed, since the beginning of the new millennium, the expansion of neoliberal capitalism and a greater emphasis on free trade resulted in the gradual establishment of educational corporatism. These changes—premised on neoliberalism and new processes of capital circulation—reinforced tuition increases across public institutions in the country. This also led to the commodification of educational resources, and simultaneously restricted access by individuals of lower socioeconomic classes, who had been previously able to afford them. Peter Taubman, in Teaching by Numbers: Deconstructing the Discourse of Standards and Accountability in Education, writes: “For the purposes of mapping the transformation of education, what is important to retain from the analyses of neoliberalism is their illuminations of the ways and extent to which corporations have penetrated into the depths of consciousness and the bodies of corporations dominate our approaches to education” (Taubman, 2009: 98). The technological revolution in information and global communication shaped new “bodies of corporation” within our colleges and universities, as much as it served as an antidote to educational corporatism with initiatives that range from small to large-scale endeavors like the OER movement.

An adjunct professor in the CUNY system since Fall 2017, I have gained a first-hand experience of educational corporatism through services that are marketed to and consumed by both instructors and students, especially when it comes to textbook selection. Notably, a publisher’s representative approached me immediately after I accepted teaching responsibilities at  Borough of Manhattan Community College, with respect to textbook options for my assigned courses. The representative informed me that students could access a digital copy of their books for $79.99 by creating an account through the publisher’s website, after which they would be required to purchase a unique access code (online or at the campus bookstore). For students who prefer a printed version, there is the option to purchase a loose-leaf copy of the textbook for an additional $20.00 fee, as long as they first register and pay the $79.99 fee for electronic access. After completing these steps, students are able to download the publisher’s application on their electronic devices, study the assigned material anytime and anywhere, set notifications on due dates, play learning games, or practice with sample tests and essay questions. Instructors, on the other hand, have access to students’ profiles, view their activities and the amount of time they spend on reading and tasks, as well as utilize features by which they can further engage students in the content. While these technological possibilities may seem somewhat remarkable or even justified in our digital age, one can hardly miss the fact that publishing companies have been able to raise their profits by designing and providing electronic resources, without minimizing the overall cost of merchandise. 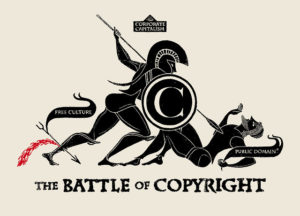 “The Battle of Copyright” by Christopher Dombres is in the Public Domain, CC0

As an Open Pedagogy fellow, I am most appreciative for the opportunity to learn about methods  of evaluating, supplementing and teaching with OER, as well as the licensing and copyright for integrating zero-cost course materials. The commodification of education is not only unjust in that it corresponds to certain class and racial divisions, but is also profoundly unethical. Furthermore, it propagates the cruel and vulgar assumption that education—along with other public benefits, such as healthcare or unemployment insurance—is not a national civil right but rather an overpriced commodity, something that can either be purchased outright or paid off through a life-binding commitment. Teachers and college professors, along with visionary activists like Bernie Sanders, can and should strive for the democratization of education and knowledge production. By removing the corporate barriers around copyright and transaction costs, OER adoption offers educators the opportunity to become part of a much-needed, new turn in knowledge production. These alternatives contribute to the de-privatization of education, and help to  democratize the workings of the larger institution by allowing access to materials that students need for academic and professional success.

The goals are simple and clear, albeit ambitious, undoubtedly partisan, and responsive to wider social issues. As educators whose professional survival depends on the ethical and political determination against neoliberalism, our future is inextricably linked to student success, as well as their socioeconomic wellbeing and intellectual prosperity. The efforts made by the OER movement are a step in the right direction, but a full democratization of education, for the purpose of creating social change for both educators and students alike, is yet to be achieved. I have no doubt that OER adoption at CUNY, alongside the growing number of state-funded OER initiatives, will slowly contribute to a more equitable educational system. I choose to take this route in my teaching and explain the benefits of this model to colleagues, including its implications and/or limitations, as a way to envision a freedom from educational corporatism. From my perspective and political positionality, it is a choice that gives more credit to students; one that accepts learning as a fundamental civil right that cannot be measured or quantified through monetary inheritance. Fundamentally, the ethos behind OER promotes opportunity and seeks to lessen the impact of existing financial entitlement.

Stefanos Milkidis is a New York based scholar, artist and educator, whose practice spans between research, writing, and creative production. Stefanos has an academic training in Visual Arts (B.A., M.A., M.F.A) and American Studies (M.A.), currently pursuing a Ph.D. in Human Geography in the Department of Earth and Environmental Sciences at The Graduate Center, CUNY. His investigations coalesce around queer geographies, urban histories, and visual culture studies, with a particular focus on New York City. He is the founder and director of the Queer Space Studies Initiative, an online platform of research on the concept of queer space. An Adjunct Professor at two CUNY colleges, he teaches courses in “American Government” and “History of Western Civilization” (BMCC), and “Introduction to Geography” (Lehman College).