Allen Zheng (they/them) is a PhD student in Physics at the Graduate Center and is currently researching in a NMR lab at Hunter. They graduated from the City College of New York in Physics and has been teaching intro physics labs at Hunter College since Fall 2020. Allen is recently interested in radical pedagogy practices after exchanges with childhood educators in Brooklyn. They believe dramatic changes need to be implemented particularly in STEM fields to break from current product-oriented banking system education, an issue which has particularly impacted CUNY’s underprivileged demographic in NYC. Currently, Allen is interested in learning more about theory on radical pedagogy and practices to implement.

Andréa Stella (she/her) is a third year PhD student in the English Department focusing on Composition and Rhetoric at the CUNY Graduate Center. Her research looks at access, disability, and abolition in the STS writing composition classroom. Andréa is queer, disabled, and mother to two young children.

Austin Oswald (he/they) is a PhD candidate in Social Welfare at the CUNY Graduate Center committed to research and education for queer, disability, and racial liberation across the life course. Their dissertation research applies queer gerontology and intersectionality theories to critically examine the “age-friendliness” of NYC alongside a coalition of queer elders of color. Austin teaches research methods at Hunter College and works with students to build knowledge that is accessible and inclusive of multiple perspectives.

Cecilia María Salvi (she/her) is a PhD Candidate in the Anthropology Program. Her research investigates the democratization of literature carried out in Latin America by editoriales cartoneras. She is a Chancellor’s Doctoral Incentive Fellow, an OIS Fellow and currently teaches at City College.

Cristina Pardo Porto (she/her) is a 5th year doctoral candidate in the Department of Latin American, Iberian and Latino Cultures. She is currently writing a dissertation on contemporary photographic practices from Central America and the Caribbean. Her research is grounded in archival work in Latin America and it has developed at the intersection of transhistorical reflection, literary and aesthetic theory (in particular of decolonial frameworks within affect theory and visual culture studies), and the history of photography. She teaches Spanish language and Hispanic cultures and literatures in Hunter College (CUNY).

Di Wu is a PhD student in Computer Science at the Graduate Center, CUNY. He has earned master degrees in Business Management and Computer Science. His research interest is Temporal Semantic Web and Database Management. He has been teaching introductory courses at CUNY since 2015. Currently he is teaching Principles Of Database Management Systems at Baruch College. Di has a strong commitment in education and dedicated effort and time to the community that lacks resources.

Jeff Voss is a PhD student in the English Department at the CUNY Graduate Center. He is currently studying the social practice of comedy as a self-destructive, convivial tool and indeterminate force of revolutionary desire. Voss teaches English Composition at Brooklyn College.

Maura McCreight (she/her) is a third year Ph.D. student in Art History with a focus on the History of Photography at The Graduate Center, CUNY in New York and teaches Art History at Brooklyn College. Her research explores the circulation of images within political and artistic networks of exchange between North Africa and Europe, with a focus on women combatants and political prisoners from the National Liberation Front (FLN) during the Algerian War of Independence (1954 – 62). She has an ardent interest in photographic forms that uphold ontologies of storytelling, and non-traditional art mediums that mobilize aesthetics as a tactic of insurgency against state repression.

Marianne Madoré is a 4th year Ph.D. candidate in sociology, concentrating on feminist theories, race and racism, and global sociology. This semester, they are teaching at Brooklyn College and collecting data for a collective research project on the use of free-of-charge materials in CUNY classrooms.

Michael L. J. Greer (she/her) is in the third year of the PhD program in Philosophy at The Graduate Center, CUNY and is an Ethics Fellow at Mount Sinai Hospital. Michael works in feminist epistemology and ethics, critical phenomenology, philosophy of language, bioethics, and fat studies. Her dissertation will investigate the concept of allyship between differentially privileged, situated, and subordinated social groups.

Natasha Tiniacos (she/her) is a poet and scholar doing the PhD student in Latin American, Iberian, and Latino Cultures in the Graduate Center at the City University of New York. Her research interests are queer disabilities, poetics, post-humanism, and sound studies. She has been teaching advanced Spanish composition to CUNY community college students and has discovered the potentiality to create an open education project that considers the intersection between students’ singular heritage and their expressive needs through writing. 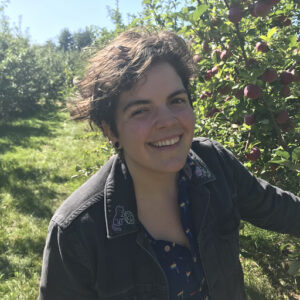 Nic Rios (they/them) is in their fifth year in the PhD program in Sociology at the CUNY Graduate Center. They earned their masters in gender studies at the London School of Economics and Political Science. Nic’s dissertation research investigates the medical construction of autistic subjectivity as it intersects with transgender identity. They teach courses on gender, education, and family in the Sociology department at Lehman College.

Ryan McKinney (he/him/his) is a third-year PhD student in Theatre & Performance and serves as Director of Theatre Arts at Kingsborough Community College. In addition to his practice-based research as a theatre director and actor, Ryan’s scholarly research interests include musical theatre & politics, theories of actor training across the Americas, gay & lesbian representation onstage, as well as civic engagement and open pedagogical teaching practices.

Shiraz Biggie is a PhD candidate in Theatre and Performance.  Her dissertation project looks at the earliest tours sent to the United States by the Abbey Theatre (Ireland) and Habima (Israel) and the relationship between diaspora and national culture movements.  Her research is centered around questions of homeland, nostalgia, storytelling, and identity.  Her evolving interests in folklore and literary adaptations for the stage have emerged from the courses in the performance of children’s literature that she teaches at Brooklyn College.

Stefano Morello is a doctoral candidate in English and a Digital Fellow at The Graduate Center, CUNY. His interests include pop culture, urban studies, poetics, and digital humanities. His dissertation explores the heterotopic space of the East Bay punk scene and its modes of resistance and (dis-)association. He is also working on a book on cultural, architectural, and public health policy responses to immigration, poverty, and disease on the Lower East Side in the 20th century.