I’m currently teaching New York City History in two different classes; one an online class at Lehman College and one a weekly honors class at Baruch. While I’ve taught New York City History in the past, the Open Pedagogy Fellowship at the Graduate Center this past January has equipped me with new strategies to make the course more accessible. Like many, I only had a vague sense of what was “open” about Open Pedagogy before I started the Fellowship. I assumed it was equivalent to free or low-cost, and that the ability to share sources for free was the main aspect of this approach.

Something that became clear over the course of the Fellowship is that this openness in resources also supports an openness in teaching and the research process. In a course like mine that has no single textbook, the professor acts as a curator of readings and primary sources: Open Educational Resources (OER) invite the students into that process and sets them up to undertake their own research more critically and effectively. When it comes to using archival resources, open pedagogy provides an openness in terms of supplying material for students to examine but also is open in terms of promoting transparency in how the course itself is planned.

Donna Davey came to our training and offered us some pointers for how to use archival resources as an OER tool. There are currently thirty-seven primary source databases available through the Graduate Center Library, though these are zero cost but not openly-licensed. Donna noted that there is still a value to using the Graduate Center Library resources, and that depending on your pedagogical needs, OER can be a strategy employed periodically throughout the class rather than a totalizing philosophy. That being said, she also demonstrated searches through a number of interesting digital archives–the ones that I have employed in my course include DPLA, Internet Archive, The New York Public Library, and the New York City Municipal Archives. 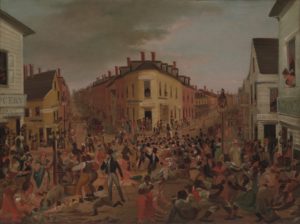 “The Five Points” by Unknown Artist is in the Public Domain, CC0

I have found the OER archival approach to be especially useful in framing my class sessions more interactively. To give one example, I began a day about Five Points by inviting the class to engage in a visual inquiry exercise using an 1827 painting of Five Points. I asked them simply, “What do you see?” and sometimes followed up their inferences and observations with “What do you see that makes you say that?” On that basis most students offered at least one observation, and we were able to tease out numerous themes that we explored further through the readings. These included the built environment’s significance in shaping Five Points, the painter’s bias in depicting the residents, and the impact of a growing visual culture in perpetuating fascination and hostility toward this neighborhood.

This material primed students for critical inquiry into the written sources for that day, including open-access primary sources through CUNY’s own American Social History Project/Center for Media Learning. Additionally, as a follow up activity for that class I was able to enjoin students to find other visual representations of Five Points using DPLA, the New-York Historical Society, and The New York Public Library, and place the image they had found in dialogue with the original image we looked at. This was also good practice for the research project on a topic of their own choosing that they will complete later in the semester.

This particular class session is just one example of how open archival materials helped promote a student-centered, focused, critical class session and worked in concert with material from previous semesters. For me, OER has been a useful seasoning for a class that I’ve taught before, and I can envision incrementally changing it over to be a completely open course in the future. 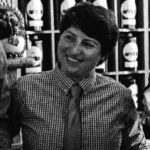 Katie Uva is an ABD student in the History Department at the Graduate Center, where her dissertation focuses on New York’s two world’s fairs and their relationship to midcentury urbanism. She has worked at Governors Island National Monument, The Lower East Side Tenement Museum, and The Museum of the City of New York, and is currently teaching at Lehman and Baruch. She is also a founding member of the Public History Collective and the Peer Mentoring Program, and currently serves as Coordinator at the Gotham Center for New York City History.

Need help with the Commons? Visit our
help page Send us a message
Skip to toolbar