Where We Are Now and Where We’ve Been: Open Access and AIDS Activism

In her influential 1991 essay, “Theorizing Deviant Historiography,” scholar Jennifer Terry wrote: “the new archivist is on the street, in the thick of things, occupying a mobile subject position” (286). For some, this image may feel incongruous. For others however, the conjuncture of activism and archives is a familiar and necessary one. Polly Thistlethwaite, the Chief Librarian at The Graduate Center, an ACT UP alumni, and a fierce advocate of open access, fully embodies Terry’s ideal.

On January 10, 2019, the first day of Open Educational Resources (OER) Bootcamp, Thistlethwaite delivered a talk, complete with personal photos, titled, “How We Got to Open Access: An Activist’s Tale.” Right away, she made clear that origin narratives are contradictory and often dangerous, and offered up her version within the context of more dominant takes on how OA has come to be what it is today. 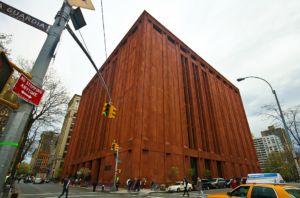 In 1986, Thistlethwaite held the dual positions of being librarian at an academic institution and a member of ACT UP. Access to medical information published by journals that could only be accessed by institutions with subscriptions was being sought by activists and PLWA’s [People Living with AIDS] in order to save their own and others’ lives. It was at this time that Thistlethwaite saw clearly that “access to medical, government, and scholarly communication is a human right.” At that time, the latest medical studies could only be accessed in terminals at the library; the consequent emergence of electronic resources, she explained, although seemingly a step in the right direction, did not actually increase access for those unaffiliated with academic institutions due to the prohibitive costs of subscription fees and paywalls.

“ACT UP logo” by ACT UP New York

Making the link between the early years of the AIDS Crisis and our contemporary moment (a link that not all early AIDS activists have been able to make), Thistlethwaite stressed that the emphasis should be not only on the origins of Open Access, but also about “where we are now.” And where we are, she argues, thanks to publisher profiteering, is a time in which “readers are in emergency.”

Although much of my own work takes place at the intersection of AIDS, archives, activism, and performance, Thistlethwaite’s presentation helped me to comprehend the stakes at play– historically and presently–when it comes to advocating for open access. Now that I have more awareness of the political thrulines of this work, I feel committed to working towards making my own scholarship and teaching materials public, and to seeking out opportunities for exchange, advocacy, and skill-building over the course of my academic career.

This semester, with guidance from the amazing librarians and technicians who led the OER Bootcamp, I have built a modest course site for my “Writing About Performance” class at Queens College. It’s not quite OER yet, as many of my readings are copyright-protected, and therefore password-protected, but it does allow for an unfolding of the course to take place in the public sphere in real time. The syllabus and course schedule are posted, students post blog entries every week, and I have invited two students a week to post “reviews” of the class so that a sense of the class as an event can be accessed by anyone. I haven’t talked about ACT UP with my students (yet), or about contemporary social justice movements, but I hope that the course’s content and form not only reflects, but also produces, resistant and visionary modes of knowledge. Even if the initiating factors of the practices we carry with us aren’t always visible, they are doing work that we can’t yet measure, here in “the thick of things” which is our now.

Jaime Shearn Coan is a writer and PhD candidate in English at The Graduate Center, CUNY, and a Digital Publics Fellow at The Center for the Humanities. His critical writing on performance has appeared in publications including TDR: The Drama Review, Critical Correspondence, Drain Magazine, The Brooklyn Rail, Bodies of Evidence, and Women & Performance. He is the co-editor of the 2016 Danspace Project Platform catalogue: Lost and Found: Dance, New York, HIV/AIDS, Then and Now.